How to Check In 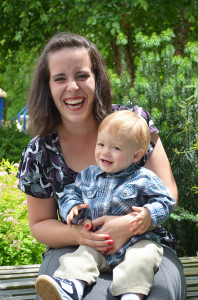 Victory Graduate, Currently Employed as a Deli Assistant at Costco in Durham

” I have graduated from the Victory Program and I’m employed at Costco in Durham as a deli associate. I thank God every single day for what he has done for me. My life has been transformed in a miraculous way.”

Before coming to the Durham Rescue Mission, I was living a very selfish lifestyle. I grew up in a Christian home and was saved at the age of 15. I was active in my church youth group and graduated from Christian school, but at the age of 18 I turned my back on everything I believed in and began experimenting with drugs and alcohol.

On October 18, 2007, I started dating Jason, who is now my husband.  It wasn’t long after we met that we began using drugs together.

During this time, I found out that I was pregnant, and on March 10, 2011 our son was born.   Having Ian changed me.  I wanted to be the best mother that I could possibly be and raise him in a Christian home, but I began to use again.

Jason had been talking to me about the Durham Rescue Mission.  He said that his dad, Melvin, had been there for a while and graduated the program.  He thought that it would be a great beginning for us to make a change, but I wasn’t ready to take that step. I continued to live a selfish and reckless life.  But during this time, I started thinking about the big picture of what my life was going to be if I continued to live the way I had chosen. I didn’t want to lose my son, but I knew that it was a possibility.  I didn’t want to overdose, but I knew that was possible too.  So I talked to Jason and we decided to take a leap of faith and go to the Mission.

On the morning of January 2, 2012, we packed for the move, but God had other plans for Jason.  He was taken into custody and sent to jail. But despite all of that I still came to the Mission.  I walked through the doors of the Good Samaritan Inn with 2 bags, a diaper bag, and a 10-month-old son. I didn’t know what to expect and I was scared, but nonetheless, I wanted to change. I began reading my Bible again and restoring my relationship with God. On February 1, 2012 I started the Victory Program. It became real to me then that God was not done with me yet. Despite all that I had done, turning my back on Him and trying to take over my own life, He still had a plan for me.

After spending the 6 months in jail, Jason finally began his journey here too. On July 23, 2012, we were married.

Today I have graduated from the Victory Program and I’m employed at Costco in Durham as a deli associate. I thank God every single day for what he has done for me.  My life has been transformed in a miraculous way.