How to Check In

GIVE NOW
VOLUNTEER
Checking In

Durham, NC – Wednesday, November 13, 2013, the Durham Rescue Mission held a ribbon cutting ceremony announcing the opening of a newly refurbished dormitory in the Mission’s church building located at 1201 East Main Street.  Dr. Ernie Mills, CEO, said “We had 21 men sleeping on the floor in the Center for Hope last night. Tonight, all 21 will be able to sleep in a comfortable bed in a freshly refurbished dormitory.”

The Durham Rescue Mission opened the Center for Hope in January of 2013.  The new building has 88 beds, classroom space, a large dining room, and a commercial kitchen. Rev. Rob Tart, COO, said “When we opened the Center for Hope, we thought it would be sufficient for housing our guests. It wasn’t long before men were sleeping on mats, even before temperatures dropped.”

The old church dorm was dark and only housed 24 men. The new dorm, refurbished by men staying at the Durham Rescue Mission, is much larger and will accommodate 40 men each night. Versal Mason and Ronald McNeil were two of the 21 men who slept on floor mats last night. Both said, “It’s beautiful and clean. We’re going to sleep well tonight. What a blessing!”

Employees of RDU Airport Authority helped fund the project. RDU employee Jeffrey Slaton said, “We wanted to do something that promoted good health and that would help a local charity. The employees got together and decided to do a bike ride from RDU Airport to Wilmington, NC and donate the funds to the Durham Rescue Mission.” The group raised over $2,000 towards the project. 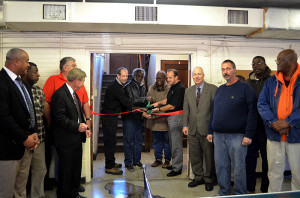 RDU Airport employees Kelli Clark, Jeffrey Slaton, and John Sullivan along with Mission guests Versal Mason and Ronald McNeil cut the ribbon to a round of applause from everyone in attendance. Afterwards, guests were invited to tour the new dorm. Many of the current residents in attendance slept in the dorm before the renovations. One resident stated, “WOW! This is beautiful and bright. I am so thankful for the Mission and the Mills.”

Tuesday, November 12th, 2013 the Durham Rescue Mission had 304 men sleeping at the men’s campus and 130 staying at the Good Samaritan Inn for a total of 434 men, women, and children.

Read a unique story of a client who had nowhere else to go and moved to NC for a new life. If you’d like to